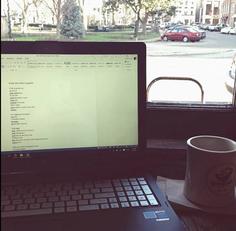 About the poem:
I wanted to write something gritty and jarring, and the title of this poem emerged so I went with it. I started with the memory of a holiday  spent with my mother and her boyfriend at the time. I immediately remembered my nightgown. After a bit of tinkering, I had a draft that covered essential pieces but wasn’t as cohesive as I knew it should be. Thankfully, there are workshops for that. After getting some good advice, I chopped that poem into pieces, rearranged some, and found this one.

I’ve been told that writing towards an idea is limiting, and should be avoided. I love when I don’t follow advice and it works out.
​

I felt so grown-up
in my hot
pink nightgown.
It was like
what my mother wore
when she
wanted to be sexy.
Short, sassy
satin, makes a twelve-year-old
mature.

He caught me wearing it
one day.
I changed clothes,
knowing
he shouldn’t see me.

That night
they celebrated his presence
with champagne
and they let me have a sip.
Mother acted
like they were serious even though the divorce
wasn’t final.

After, she said it was time for bed.
I said goodnight
and put my nightgown on.
He wanted
a hug, and mother encouraged it.
So I let him
sit me in his lap.

I wore
my nightgown in her
boyfriend’s house,
and he slipped it off me one night.