in a van
by the river
you’ll end up
cream of
clam soup, spurting
lime juice, washing the hands, feet, fat
chance yet wishing for just one more.
In sand and mud and goo sluice; the van
down by the river, the van
it’s you, don’t be flippant
son, daughter, fucker, real blood
foils, floods
the clutch, boiled and jumped it too,
lasso, sleep from a pale blue
noose.
All the other living being equal, the iffy
selfish things you do, with no second thought
Sherlock, Jesus we all get
fat, no matter,
a peddler or welder, working standing up
with the hideous Vader hood, snapped tendons
as metal, Mig, Tig, ping, sparklers, kids licking
pancake syrup from polypropylene
waders.
Fly, fly fishy green
alumni around the O rings, I am
apparition spouting Motivation
Speak, dig, an approximation ...
hauling
the gut as a sea chest,
big mist spit, comedy.
Three hundred fifty pound butt
like Puget Sound anchor, all these nifty
fricking homilies ... and the people will
love me, til I flat seized up
with bank jobbers dye,
my game face bulging, bulging, look
there’s a chance yet, that van, it’s not
so bad, only you, straw hats, pocked
full of exactly nothing, and memory.
You get a wee bit better every
mourning soon, I’m
not coming
back. 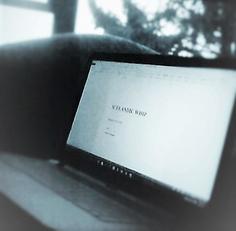 About the poem:
I love Chris Farley, but with respect to this poem I didn't necessarily set out to write
about the man. Rather, it was the single line, about the “van by the river,” that caught
me unawares, first and foremost. The sound and texture of these words, and all they
might evoke, if  properly pursued. Then, the cream of clam soup spurting lime juice,
etc. As I worked these images out, Chris Farley's voice (amalgamated with my own)
sort of coalesced, as a matter of course, through a raft of revisions. This is the way I
almost always compose my poems, I. E. -- "inside out." I could not "write to a topic"
to save my soul. All things being equal, I think this is just how it should be. I like to
imagine as well, that Chris Farley, wherever he is, may in time, agree.
​