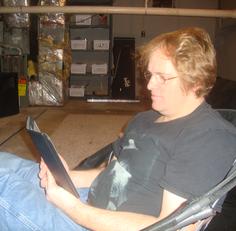 About the poem:
I started writing this sequence of poems in Fall 2014. I had been working on a book of research-driven poems (The State That Springfield Is In) and it was a relief to write poems driven more by imagination and observation. At first, I just noted what was happening in my day and tried to imagine how I might have died that day. For example, I cut myself with a broken glass while washing the dishes and then wrote a poem in which the cut was fatal. Then I started working my way through the journalist's questions. Most of the poems are about how I might die. Others question why I have to die, who I am in this short space between my birth and my death, where I will die, when I might die, and what will ultimately kill me. Partly this is an exercise in striking the right tone, or trying to. I don't want these poems to be morbid, nor do I want to take death lightly. Of course, death isn't the real subject of these poems. It provides the occasion for writing about the poem's real subjects, which are various but all having to do with life, mine and yours.
​

Like most people, Tom C. Hunley
died piecemeal, not all at once

The parts of us depart
often unnoticed

Death is like hocking your watch,
your guitar, and your flatscreen,
intending to buy them all back
on payday but payday never comes
or someone walks into the shop first
or the shop’s going-out-of-business sign
which began as a scam or marketing scheme
becomes a prophecy

Or death is this humming sound
that’s always been there but unnoticed
until someone asks if you hear it
and then it won’t leave you alone,

Here lies Tom C. Hunley
who bit into a fortune cookie
after the fortune said you will choke to death on a cookie
but survived and who hugged the burning scarecrow
that lit up a field of watermelons for him
but survived that too and who felt pulverized
by a sunset by lightning by the beauty of a woman
Tom C. Hunley           who orchestrated and survived
so many wrecks in the toy train of his childhood
who loved fanning himself by turning pages
who felt like an ugly duckling
in high school but found some even uglier ducklings
in graduate school and so came to understand
that story and so many others
who grew up and offered to pay the check
because that’s what growing up means
paying the check knowing you can’t afford to
then stepping aside while the next generation
invents its own slang its own songs its youthful new truths
and sleeping more and more until finally it seems like
a good idea not to get up,

Tom C. Hunley wasn’t ready
to be dead, he fought and flailed
like a moth fallen on a pond

A fallen moth flutters on the surface
of the pond, its wings making ripples
that make waves, its shadow
larger than the moth itself
in the glittering sunlight
but Tom C. Hunley didn’t flutter,
he flailed, and face it, he failed

He had made it
to eighty and had no complaints:
except that he couldn’t see out the hospital window
(too high, too bug-spattered)
and the fact that the batteries in his TV remote
had died
and he had no words left in his throat
to tell the smooth-skinned nurse
with eyes like olives drenched in alcohol
and a laugh learned in some faraway night club
that on another channel, one he could not turn to,
he was still a virile man with countless breaths left,
not moth-eaten, not half gone,
not a small splatter on a windshield
watching the wiper blade’s certain arc,